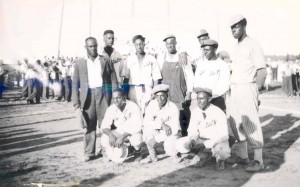 Beginning in 1911, black families from Oklahoma began moving to Canada in order to escape rampant racism and the poor quality of life resulting from their limited rights. Of more than 1,000 (by some reports, up to 1,500) blacks that came to Canada, around 300 moved into Amber Valley/Pine Creek area east of Athabasca, beginning in 1910. While a few were able to find abandoned land claims that improvements were already made upon, most needed two or more years to harvest their first crop.

By 1920, the average holding at Amber Valley consisted of thirty-eight acres (virtually all crops), three horses, two cattle, and houses and fence, totalling a value at $400, which although was low, was deemed sufficient by the local authorities. Like their white counterparts, the Black farmers did not spend all their working hours in their fields. Cash was always a problem for pioneer farmers, regardless of their colour, and the African Americans supplemented the family budgets by freighting, lumbering, and other jobs that were available seasonally in the area.

With files from Collections Canada

Check out this video for more information on Amber Valley – Secret Alberta: The Former Life of Amber Valley.