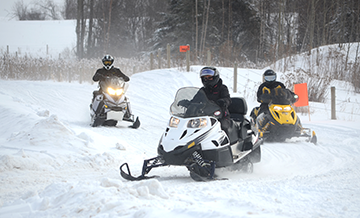 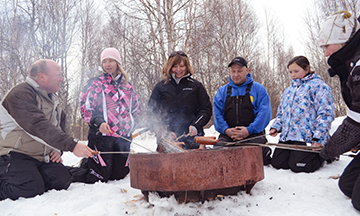 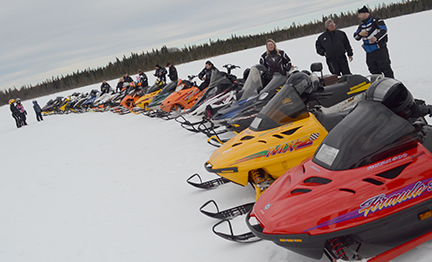 There’s no doubt that snowmobiling is popular in the Athabasca region. But did you know that the Athabasca River Runners Snowmobile Club maintains over 240km of trails plus part of the Trans Canadian Snowmobile Trail?

Athabasca is linked to Swan Hills, Flatbush, Smith, and Calling Lake by snowmobile trails. Five rest stops along the way come complete with fire pits, firewood sheds, picnic tables, and washrooms – two also include warm-up cabins. Trails are well-marked with directional, caution, and traffic signs. Their annual family-friendly rally is held in February and is a great introduction to the trails and community.

The River Runners Clubhouse is located just west of Athabasca, which doubles as a staging area to access the trails. There is also a staging area west of Baptiste Lake on Township Road 670.

For more information on the club or to organize a guided tour, visit their website at www.athabascariverrunners.ca.

To view a PDF version of their trail map, click here. The map shows the permitted routes through the Town of Athabasca.

To book a tour with Ray, contact Reel Angling Adventures.

Ice fishing is a great cure for cabin fever. When the sun is up, and the skies are clear, the regions many lakes can be a welcome place to take a break with family and friends.

Many people who haven’t tried ice fishing before are surprised at how relaxing it is, even if they don’t catch a thing! And, anglers in the region are great at giving tips to the uninitiated and striking up a conversation.

For the seasoned angler and adventurer there are many lakes that can only be accessed by snowmobile in the winter. They offer a chance to combine snowmobiling with angling.

For more information about angling visit the My Wild Alberta website.

A nice area free of crowds, the Muskeg Creek Trails double as groomed one track cross-country and skate skiing trails in the winter. Enjoy 15km of trails, ranging from easy to advanced, right within town limits. Maps at all trail junctions let you know where you are to help stay the course. If you only have an evening to spare, 1.2km of trails are lighted

The main trail head is located across from the Landing Trail Intermediate School, accessible from 56th Street. Other access points are from the school grounds and at Athabasca University.